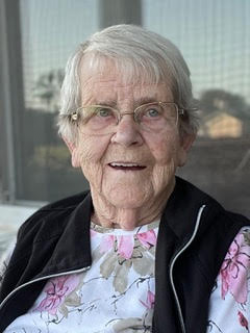 Frances (Frankie) Ruth Dewar, age 91, died peacefully surrounded by family on Sunday, January 22, 2023 at the Community Hospital O’Leary. The only daughter of Lloyd and Mary Wilson, Frankie grew up in Halifax, NS but moved to O’Leary, PEI in 1954 with her husband of 70 years, Dr. Charles.

Frankie was involved in many organizations such as Special Olympics, O’Leary United Church, O’Leary Figure Skating Club, O’Leary Community Council and Scouts Canada. She was especially proud of her volunteer work with Scouts Canada, receiving many distinguished awards including the Long Service Medal, the Medal of Merit, the Silver Acorn, the Brigadier-General W.W. Reid, the Bar to the Silver Acorn and the Scouts Canada Centennial Commemorative Medal. Frankie also received the O’Leary Volunteer of the Year and Citizen of the Year awards.

Arrangements have been entrusted to Ferguson’s Funeral Home, 351 Main Street, O’Leary (902-859-2768) where the family will receive family and friends from 1:00 to 1:45 pm, Saturday, January 28, 2023 followed by a celebratory service in the Chapel at 2pm. Cremation and family burial will take place at a later date.

In lieu of flowers, Frankie requested donations be made to: