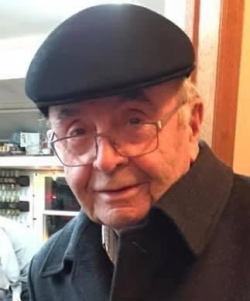 The death occurred at the Palliative Care Unit, Community Hospital, O’Leary on Sunday, September 12, 2021 of C. Erskine MacMillan of Union, aged 88. Erskine was born in Brockton, June 4, 1933 son of the late Charles and Bertha (MacArthur) MacMillan.

Dear brother to Leigh (Tina) MacMillan, Isabel Sutherland, Elizabeth MacMillan and Leslie (Chris) MacMillan. Brother in law to Jean Johnston and Stella Campbell. Erskine will be missed by his numerous nieces and nephews.

Resting at Ferguson Funeral Home and Chapel, O’Leary. Due to current restrictions, private visiting hours for invited guests on Wednesday and private funeral at Elmsdale Church of the Nazarene on Thursday for invited guests only. Interment to follow in the Church Cemetery.

In memory of Erskine, memorials can be sent to the Elmsdale Church of the Nazarene or Cemetery Fund, PO Box 10, Elmsdale, PE, C0B-1K0, would be appreciated.