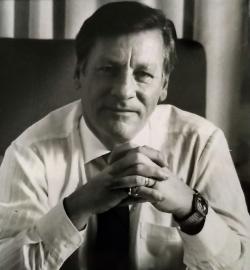 The Hon. George Roland Henderson died peacefully at his home in Freeland, PEI, on Tuesday, May 5 th, 2020. He was in his 85 th year.

He is survived by his Sisters-in-law Isabel Henderson , Pickering, ON, Gloria Henderson New Glasgow, NS, Judy Hutt (Gary) Northport, PEI, and Carolyn Matthews, Moncton, NB, as well as numerous Nieces and Nephews of whom he was extremely proud. His family loved him very much.

George was predeceased by his wife Brenda Lue Henderson and his son, Jason George; his parents Robert Edgar and Hazel Edna Henderson; and his older brothers, Harold Henderson and Dr. Erland Henderson, as well as his brother-in-law, Roger Matthews.

George was very well known and had numerous friends but had a special fondness for the neighbors who were so good to him in his later years: Billy and Joanne Palmer, Matt and Debbie Smith, and Charles MacKay.

George had a distinguished career in public service, first as an elected representative in the PEI Legislature from 1974-1980, and then as a Canadian Member of Parliament from 1980-1988. He served in several executive capacities: PEI Minister of Fisheries and Labour; PEI Minister of Highways and Public works; in Ottawa as MP for Egmont serving as Parliamentary assistant to the Minister of Fisheries and Oceans; and later as Parliamentary assistant to the Minister of National Defence. Over the years of his political career he made many close friends: Premier Alex and Marilyn Campbell, Bill and Denise Morrison, MLA Eddie and Ruby Clark, MLA Allison and Melba Ellis, MLA Keith and Debbie Milligan, MP Joe and Mary McGuire, and MP John and Diane Campbell, Don and Myrna Chapman and Marion Reihl among many others.

The work he chose reflected and grew from his life as a PEI native son: after graduating from Prince of Wales College, he worked as an Electrician and then a Shellfish Technician, becoming a pioneer in the shellfish industry by developing "Malpeque Oyster Cultures", an innovative oyster production facility in Freeland, before entering public life as a School Board trustee for Unit 1, an MLA and eventually an MP for the province. He eventually semi-retired, working as a DVA pension commissioner and ACOA board advisor. He and Brenda had a small tourism cottage operation with many repeat customers who became like family.

Resting at Ferguson Funeral Home & Chapel, 351 Main Street, O’Leary, due to Covid 19 restrictions a Private Funeral Service will be held in the Chapel on Saturday August 15. Interment to follow in the Freeland Presbyterian Cemetery.

Expressions of sympathy in memory of George can be made to the Freeland Presbyterian Cemetery Fund or the Canadian Cancer Society (PEI) or to any organization of your choice, with many thanks from George's family.