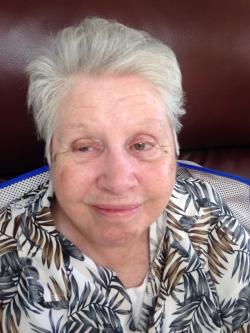 The death occurred peacefully with her children by her side, at the Wedgewood Manor, Summerside on Thursday, June 6, 2019 of Cecelia  Helen Jones of Summerside, formerly O’Leary aged 78, wife of the late Wilfred Jones. Cecilia was born in O’Leary on January 4, 1941, daughter of the late Joseph & Irene (Gavin) Gallant.